Home / Content / Books / Yes Is More: Tangible and Timeless Ways to Differentiate Yourself from Your Competitors

Yes Is More: Tangible and Timeless Ways to Differentiate Yourself from Your Competitors

In good times and bad, loyalty to employees, loyalty to manufacturers, and loyalty to customers—plus that unique something special—always point the way to success.
What makes customers want to do business with you when your products may be virtually the same as anyone else’s in your industry? Learning how to say yes instead of no, and your ability to show the customer you are prepared to go the extra mile for them is businessman Howard Brown’s answer. He should know. He built and sold three very successful office supply businesses, going up against big-time competition and winning every time. In a friendly, matter-of-fact style, the author provides classic wisdom that never goes out of style in the pursuit of profit and success. Some of his points include:

Brown’s main focus is on creating a unique added value for customers to make your business stand out, and he shows how to give customers something special, regardless of what you are selling. Entrepreneurs of all stripes will take away value from Yes Is More. 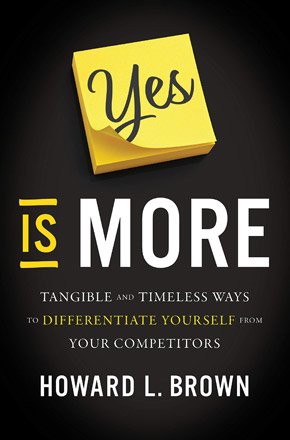 Howard L. Brown graduated from Syracuse University in 1967, got married to Nancy Goldis, and joined one of the family plastics companies. In 1972, he purchased Summit Office Supply, a $300,000 office-product company, which he expanded both through internal growth and acquisitions in the New York/New Jersey/Long Island/Westchester metropolitan area. In 1987, he sold Summit to Dutch company Buhrmann-Tetterode (BT) with company sales of $55 million. He remained with the company until 1996, increasing their footprint in the Northeast to more than $500 million. In September of 1998, Brown and investors purchased ten office-product companies in one day, including the main spoke, Allied Office Products in Hasbrouck Heights, NJ. Combined total sales of the companies were approximately $110 million. In 2006, the group of companies known as Allied Office Products was doing sales of $375 million, and Brown once again made an impressive sale—this time to Office Depot. In 2007 and 2008, Brown, his son, employees, and most of the same investors purchased Rentacrate, followed by Shred-X. His restricted covenant for the office-product industry ended in May of 2010 and HiTouch Business Services Inc. became the parent company of Rentacrate and Shred-X. In October of 2010, HiTouch Business Services, Inc. purchased My Office Products, Inc. (doing approximately $120 million in sales), giving HiTouch a nationwide distribution. His team successfully grew HiTouch as he had done with his previous companies, and in 2018, Brown again sold his company, this time to Staples. Along the way, his team introduced many firsts in the industry and developed the “one-solution sell.”

Today, Howard enjoys spending time with all five of his grandchildren, playing golf, and giving back to the community. His family is actively involved in different charities, including CCFA (Crohn’s & Colitis Foundation of America) and many Jewish causes. His wife sits on the boards of and takes an active role in fundraising and leadership for these and other organizations.